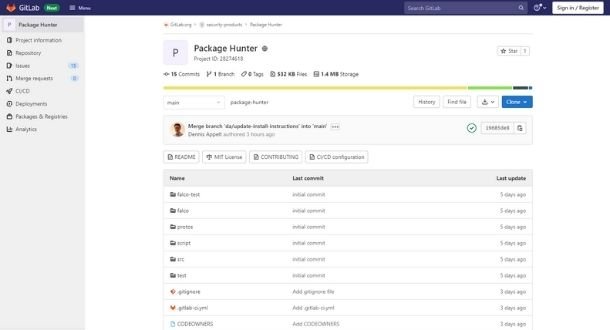 A few days ago GitLab announced the release of Package Hunter, a new open source tool for identifying potentially malicious code in web development dependencies. This tool will help developers prevent the inclusion of harmful creations in their projects considering that the use of open source libraries and the reuse of code are very common practices nowadays.

Some applications rely on a few hundred packages, some of which are not examined with due care. These weaknesses can be abused by threat actors in supply chain attacks, a variant of hacking that has shown considerable increase in recent months.

GitLab teams hope the tool will make it more efficient to detect malicious code that would run on an application’s dependencies and that is hard to find using other popular scanning tools.

Package Hunter dependencies are installed in a sandbox environment, from which system calls executed during the installation of new packages or libraries are closely monitored to identify potential cybersecurity risks. The tool has been used internally on GitLab since late 2020 and will now be available to general users.

It should be mentioned that the tool has some prerequisites for its installation, including:

The use of this tool is very simple:

A detailed guide to using Package Hunter is available on the official GitLab site.

The richest digital pirate: “Omi in a Hellcat”, an illegal IPTV streaming company owner was arrested

These devices and OS will have problems next year as Let’s Encrypt Root Certificate is expiring! Check if your device is the list

Cybercrime theft of 500,000 card details could have been prevented state Avecto

Malware.ws is a free community forum where people like yourself come together to discuss and learn how to use their computers. Using the site is easy and fun. As a guest, you can browse and view the various discussions in the forums, but can not create a new topic or reply to an existing one unless you are logged in. Other benefits of registering an account are subscribing to topics and forums, creating a blog free.

This site has been updated, and re-launched, so we welcome all new malware removal questions and requests.